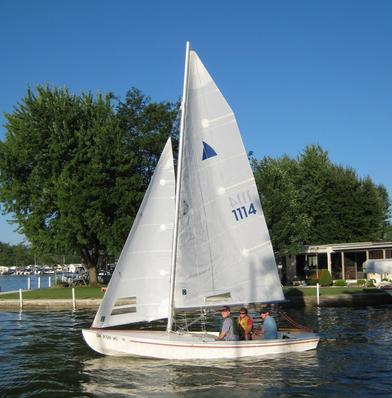 For more information, go to the class website at:  http://interlakesailing.org/

The Interlake is an eighteen foot-long sail boat that carries a jib, main, and spinnaker. It is normally sailed by two people and was developed for sailing on Lake Erie. It is a comfortable, yet nimble boat that is easily trailerable.The Interlake fleet here at ILYC puts on a steak dinner every Memorial Day weekend for all club members and their families. The fleet also holds a weekend-long Interlake regatta in July that is part of the Interlake Class Association Traveler's Series. This is a series of regattas over a 3-state area that draws the top sailors in the class.The Interlake National regatta is a 4-5 day event that is held at a different yacht club each year. ILYC participates in this round-robin hosting and held the regatta here in 2000 and again in 2010.During the normal club racing schedule, only boats of the same class race against each other. As a fun event, the Interlake fleet hosts a handicap race for all club members on Labor Day. It was started by an Interlake sailor named Stouder Thompson and the race is named after him to this day. Water balloons and super soakers are usually part of this event.If you are interested in purchasing a new or used Interlake, please use the Contact Us form, Subject "Interlake Fleet Captain".